Novellas are so rarely done right. They either have too much going on or not enough. When novella’s go wrong the characters are lifeless, the plot is none existent, and the relationships feel forced. To avoid this, writers must go about writing a short story in the same way they would write a full length novel. There needs to be rising action, climax, and falling action. There should be surprises and originality, not just sex. Sex is good, even in abundant amounts, but not when the sex scenes feel forced and pointless. It must feel relevant to the plot, and natural for the characters to behave in such a manner.

Today, I’m showcasing Patricia Briggs’ novella, Alpha & Omega. Although, this lacks the steamy scenes we all love, it’s a good example of how to pace and plot your novellas. Even though this is a short story it feels complete and realistic (for PRN and UF, anyway). 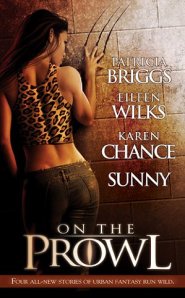 She drove well, if a little overcautiously — which trait he didn’t mind at all, though it didn’t stop him from bracing one hand against the dash of the rental. She hadn’t said anything when he told her to drive them to her apartment, though he hadn’t missed the dismay she felt.

As she drove down them down the expressway in the rented SUV, his wolf-brother had gone from the killing edge caused by the crowded airplane to a relaxed contentment Charles had never felt before. The two other Omega wolves he’d met in his long lifetime had done something similar to him, but not to this extent.

This must be what it was like to be fully human.

The anger and the hunter’s wariness that the wolf always held was only a faint memory, leaving behind only the determination to take this one to mate — Charles had never felt anything like that either.

She was pretty enough — though he’d like to feed her up and soften the stiff wariness in her shoulders. The wolf wanted to bed her and claim her as his own. Being of a more cautious nature than his wolf, he would wait until he knew her a little better before deciding to court her.

“My apartment isn’t much,” she said in an obvious effort to break the silence. The small rasp in her voice told him that her throat was dry.

She was frightened of him. Being his father’s chosen executioner, he was used to being feared, though he’d never enjoyed it.

He leaned against the door to give her a little more space and looked out at the city lights so she’d feel safe stealing a few glances at him if she wanted to. He’d been quiet, hoping she would get used to him, but he thought now that might have been a mistake.

“Don’t worry,” he told her. “I am not fussy. Whatever you apartment is like, it is doubtless more civilized than the Indian lodge I grew up in.”

“I’m a little older than I look,” he said, smiling a little. “Two hundred years ago, an Indian lodge was pretty fancy housing in Montana.” Like most old wolves he didn’t like talking about the past, but, he found he’d do worse than that to set her at ease.

“I’d forgotten you might be older than you look,” she said apologetically. She’d seen the smile, he thought, because the level of her fear dropped appreciably. “There aren’t any older wolves in the pack here.”

“A few,” he disagreed with her as he noted that she said “the pack” not “my pack”. Leo was seventy or eighty, and his wife was a lot older than that — old enough that they should have appreciated the gift of an Omega instead of allowing her to be reduced to this abased child who cringed whenever he looked at her too long. “It can be difficult to tell how old a wolf is. Most of us don’t talk about it. It’s hard enough adjusting without chatting incessantly about the old days.”

She didn’t reply, and he looked for something else they could talk about. Conversation wasn’t his forte, he left that to his father and his brother who both had clever tongues.

“What tribe are you from?” she asked before he found a topic. “I don’t know a lot about the Montana tribes.”

“My mother was Salish,” he said. “Of the Flathead tribe.” She snuck a quick look at his perfectly normal forehead. Ah, he thought, relieved, there was a good story he could tell her. “Do you know how the Flatheads got their name?”

She shook her head. Her face so solemn he was tempted to make something up to tease her. But she didn’t know him well enough for that, so he told her the truth.

“Many of the Indian tribes in the Columbia Basin, mostly other Salish peoples, used to flatten the foreheads of their infants — the Flatheads were among the few tribes that did not.”

“So why are they the ones called Flatheads?” she asked.

“Because the other tribes weren’t trying to alter their foreheads, but to give themselves a peak at the top of their heads. Since the Flatheads did not, the other tribes called us “flat heads”. It wasn’t a compliment.”

The scent of her fear faded further as she followed his story.

“We were the ugly, barbarian cousins, you see.” He laughed. “Ironically, the white trappers misunderstood the name. We were infamous for a long time for a practice we didn’t follow. So the white men, like our cousins, thought we were barbarians.”

“You said your mother was Salish,” she said. “So the Marrok isn’t Native American?”

He shook his head. “Father is a Welshman. He came over and hunted furs in the days of the fur trappers and stayed because he fell in love with the scent of pine and snow.” His father put it just that way. Charles found himself smiling again, a real smile this time and felt her relax further — and his face didn’t hurt at all. He’d have to call his brother, Samuel, and tell him

that he’d finally learned that his face wouldn’t crack if he smiled. All it had taken to teach him was an Omega werewolf.

She turned into an alley and pulled into a small parking lot behind one of the ubiquitous four story brick apartment buildings that filled the older suburbs of this part of town.

She nodded her head and hopped out of the car. “The best Italian restaurant in Chicago and my current place of employment.”

Ah. That’s why she smelled of garlic.

“So your opinion is unbiased?” He slid out of the car with a feeling of relief. His brother made fun of his dislike of cars since even a bad accident was unlikely to kill him. But Charles wasn’t worried about dying — it was just that cars went too fast. He couldn’t get a feel for land they passed through. And if he felt like dozing a bit as he traveled, they couldn’t follow the trail on their own. He preferred horses.

After he got his suitcase out of the back, Anna locked the car with the key fob. The car honked once, making him jump and he gave the car an irritated look. When he turned back, Anna was staring hard at the ground.

The anger that being in her presence had dissipated surged back full force at the strength of her fear. Someone had really done a number on her.

“Sorry,” she whispered. If she’d been in wolf form she’d have been cowering with her tail tucked beneath her.

“For what?” he asked, unable to banish the rage that sent his voice down an octave. “Because I’m jumpy around cars? Not your fault.”

He was going to have to be careful this time he realized as he tried to pull the wolf back under control. Usually when his father sent him out to deal with trouble, he could do it coldly. But with an Omega wolf around, one that he found himself responding to on several different levels, he was going to have to hold tight to his temper.

“Anna,” he said, fully in control again. “I am my father’s hitman. It is my job as his second. But that doesn’t mean that I take pleasure in it. I am not going to hurt you, my word on it.”

“Yes, sir,” she said, clearly not believing him.

He reminded himself that a man’s word didn’t count for much in this modern day. It helped his control that he scented as much anger on her as fear — she hadn’t been completely broken.

He decided that further attempts to reassure her were likely to do the opposite. She would have to learn to accept that he was a man of his word. In the meantime he would give her something to think about.

“Besides,” he told her gently, “my wolf is more interested in courting you than in asserting his dominance.”

He walked passed her before he smiled at the way her fear and anger had disappeared, replaced by shock . . . and something that might have been the beginning of interest.